A concert in celebration of Asian/Pacific American Heritage Month 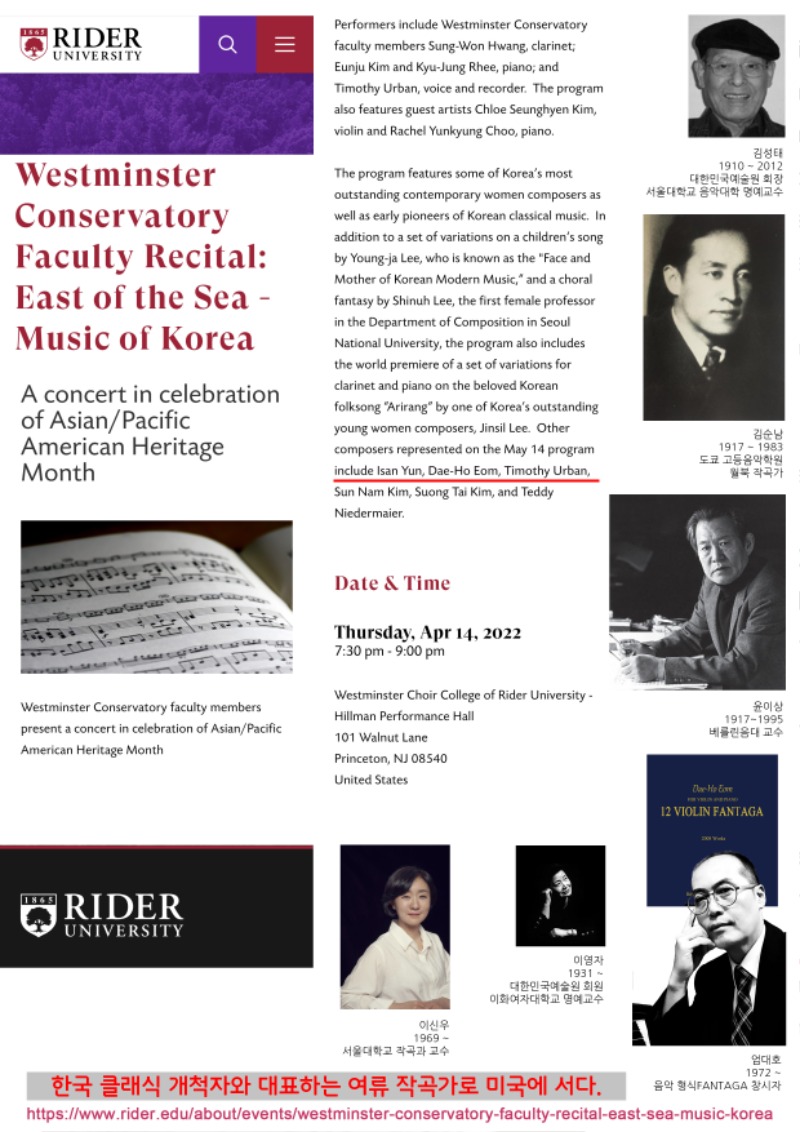 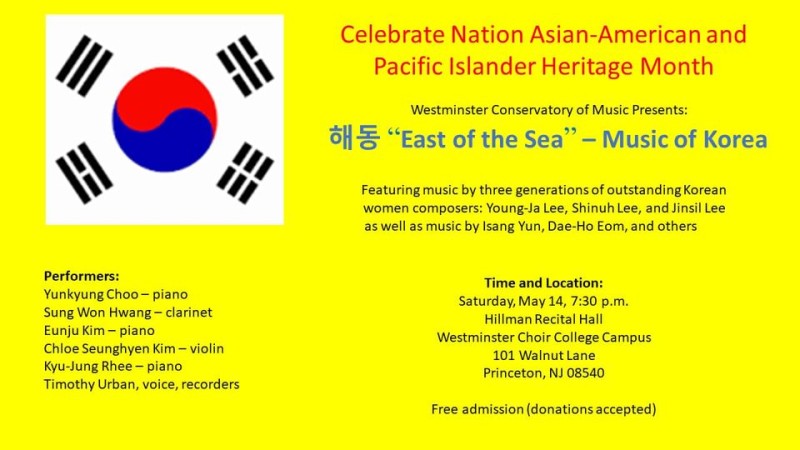 Composed by Dae-Ho Eom  <Geojedo Suite No.2 "Song of Waheon">

Clarinetist Sung-Won Hwang is one of the most sought after performers and teachers in the New York City area. Her ability to "mesmerize audiences with her dynamic presence and interpretation" has taken her to perform extensively in renowned venues such as Weill Recital Hall at Carnegie Hall, Merkin Concert Hall, Symphony Space, Steinway Hall, Kimmel Center for the Performing Arts, John F. Kennedy Center, and Toronto Center for the Arts. She has given masterclasses at music clinics and festivals as a classical music advocate in Italy, France, Switzerland, Germany, Korea, China, Japan, Mexico, Canada, and the United States.

A devoted chamber musician, Dr. Hwang is a founder of a chamber music group, A440, and has coordinated concerts to promote new music composed by emerging composers around the world and recorded on Naxos Records, Mark Records, Composers Recordings, Inc., as well as independent folk music labels. She has served on the woodwind and music theory faculties at Eastman Community Music School, Mason Gross Extension Division, and Rutgers Preparatory School.

Currently teaching woodwinds, chamber music, and aural skills at Rutgers University and Westminster Conservatory, Dr. Hwang maintains a busy lecture and performance schedule. She is also an active adjudicator at various competitions for young professionals as a member of Music Teachers National Association and National Association for Music Education.

Dr. Hwang received Bachelor and Master of Music degrees in Clarinet Performance and Literature from the Eastman School of Music and a Doctor of Musical Arts degree from Rutgers University. Her teachers include Richard Hawkins, Jon Manasse, Kenneth Grant, Robert DiLutis, and Maureen Hurd.

Eunju Kim, MM in Sacred Music, NCTM, is currently a senior piano faculty member at the Westminster Conservatory of Music, Rider University and the Music Director of All Nations Church in Voorhees, NJ. In addition to her status as a teacher and a performer, Mrs. Kim currently serves as a chairperson of the NJMTA Advanced Master Class Audition. She has also served as a chairperson of the New Jersey Composer Commission Competition.

She received Bachelor of Art from GyeongSang National University and Sado Scholarship from Korean Ministry of Education while she was studying in Gyeongsang National University in Korea, and Master of Music from Westminster Choir College. In addition she was awarded the Steinway & Sons Top Music Teacher in 2016 - 2018.